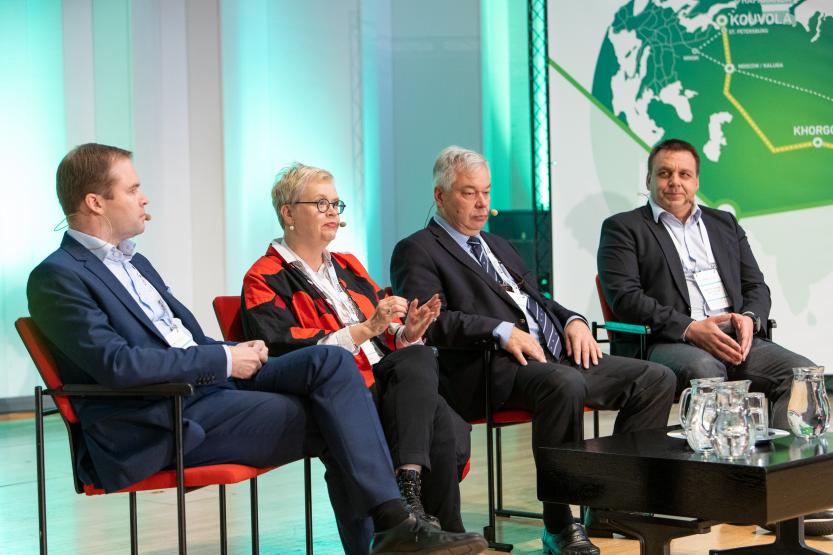 In a networked world that is dependent on global trade, curbing CO2 emissions caused by traffic is a big challenge. Railforum 2019 invited representatives from land, sea and air to discuss solutions.

Air traffic is traditionally the “villain” in the climate play, with considerable carbon sins to atone. Arja Suominen, Senior Vice President for Communications and Corporate Responsibility, Finnair, said that the industry is committed to the “Cut & Compensate” principle, meaning that companies such as Finnair will cut CO2 emissions where they can and compensate for them where they can’t.

“Also, there are, for example, new biofuels being tested that reduce carbon emissions by 10-20%,” she said. In addition, better organisation and smoother flow of information can yield great results, too: by streamlining air control operations, for instance, planes can spend less time in the air, burn less fuel and achieve savings of up to 10%.

Both sides of the fence?

Staffan Herlin, Marketing Director, Finnlines, noted that the shipping industry is often both “the good guy and the bad guy” in the transportation debate. Only about 2,2% of the global C02 emissions are caused by shipping, while its handling 90% of the world’s cargo flows. On the other hand, there are a lot of ships out there which date back to 1970’s or even 60’s and can hardly be described as “environmental”.

“The role of shipping is big in transport and a lot can be done to reduce carbon emissions,” said Herlin, citing LNG, hydrogen, solar and electric ships as tools for change. “It’s about putting all these bits and pieces together, because that’s when they do make a difference.”

Tero Kosonen, Vice President of Sales and Marketing, VR-Group Ltd, VR Transpoint, commented that in Finland, the share of cargo that is being transported along rails is on a solid level.

“The rail takes a 30% share of all cargo transport in Finland, while in Europe the rail can muster about 10% of the total cargo,” he said.

Against this background, it’s clear that there are limits to how much cargo you can put on the rails – after all, those same rails need to transport people, too.

“Still, growth is possible and we are interested in new opportunities,” Kosonen said, adding that electric solutions for rail already exist. “Backed up with electricity from hydropower, for instance, you can enjoy carbon-free transportation.”

Serving as a “referee” of sorts in the panel, the was Jarkko Rantala, Unit Manager from WSP Finland. Rantala observed that all modes of transport are increasingly carbon-conscious and investigating various areas to curb emissions.

“When it comes to logistical infrastructure such as the European rail network, we can see it already straining and there are a lot of bottlenecks in Central Europe”, he said, retrieving a familiar benchmark from the East:
“Can be it be that only the Chinese are able to successfully expand their rail network, and the others – for some reason – just can’t”?

While the panelists quickly found common ground on the need to curb carbon emissions, another united front emerged near the end of the panel. Interconnectivity and intermodality were seen as key development targets for the future by all panel participants.

“In the coming years, we may see a trend where short distance cargo – which previously utilised air transport – now switches to rail for environmental reasons,” Arja Suominen offered one example of what’s to come.